It’s so chilly right now, my feet are suffering. I bought a 5 pack of these foot cover things from a big box store and they are too big, and not as cotton as they say they are, and I feel I could do better. So, I decided to make some “footies” out of merino.

The commercial ones. No they don’t change colour on my feet, I was wearing odd ones!

You could easily make these from offcuts or even an old merino top.I bought a little bit though so I could get started: 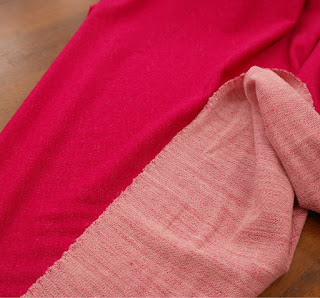 My merino has a backing on it which is lighter, so easier to see in photos. That’s why I chose it, besides it is raspberry pink so YAY!

This is the pattern I made:

It’s really easy to draw your own. the one tricky bit is how stretchy your fabric is – mine is a typical one way stretch and that goes around the foot so this is what I did:

Draw a rectangle. The long side is the length of your foot minus 2cm. The width is half of 75-80% of the measurement around the widest part of your foot – mine is 25cm so I made may pattern 10cm. (I have huge feet so don’t be alarmed if your numbers seem much smaller!)

Next, I measured the back of my heel from the ground to how high I wanted it to be plus a bit more, it came to 8cm. Mark that on one short end of your rectangle.

Now draw a curved line that goes down a bit then up at a bit past half way – like mine.

That’s it! Put a Fold arrow on the long straight side as a reminder, and cut two out of your fabric on the fold: 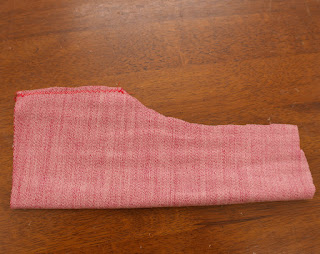 Now sew the short sides together like this – you could overlock but I’ve just done two rows of zigzag on top of each other. 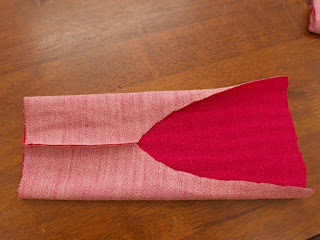 Turn it so the seam is centred like this, and mark a curve at the same end – this is for your toes. 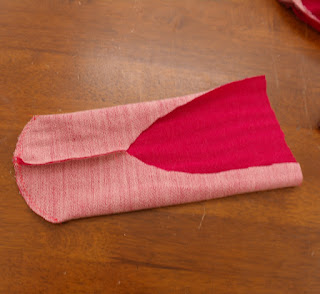 Sew and then trim your marked curve. 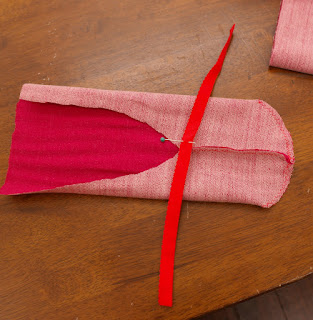 I cut a piece of fold over picot elastic slightly shorter than the curved top edge of my footie, and mark the centre with a pin. Pin this onto the spot where the seam is and attach the elastic, stretching as you go, with a zigzag. I find in these little jobs I don’t have to pin, and the fabric stays in the fold over, but you can pin it if you like. 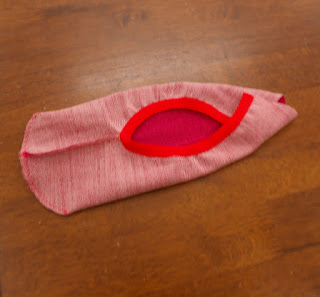 This is what I ended up with. 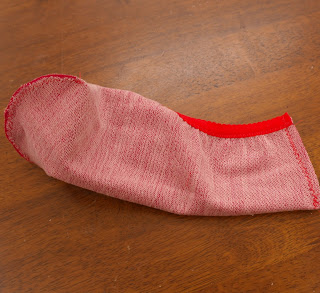 Now fold the short end like this and sew through both layers including the elastic. 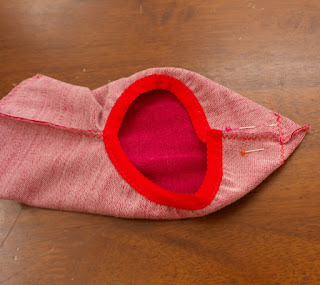 Squash the heel so the seam is centred like this, and sew across the triangle like shown. Not too much, just a little bit to get rid of a point at the bottom of your heel. 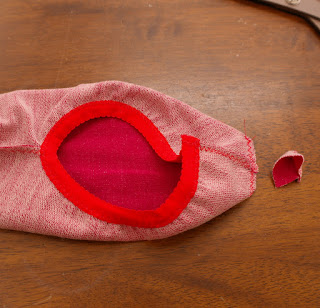 Snip the wee triangle off like this. And that is IT! Turn it right side out and: 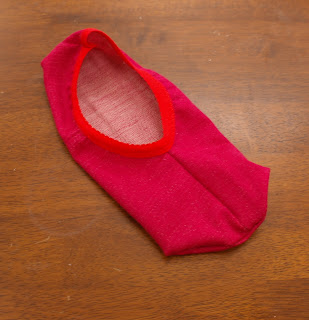 Voila! One footie! No seams on the sole to be irritating either. And here they are again on my undainty feet: 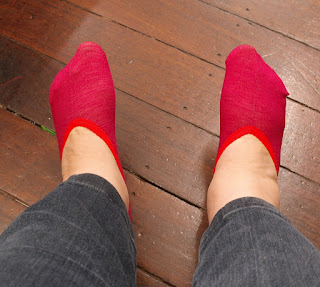 They are SO much nicer than the bought ones.

Top Tip: wear these over tights, pantihose or knee highs and they are far warmer, and the under layer stops them slipping down at all. Perfect for inside boots too if you want a warm boost without socks showing! 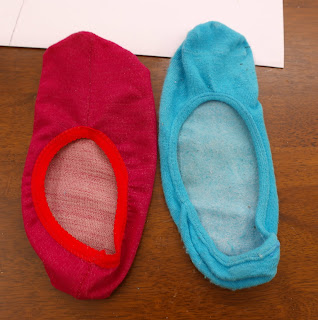 Last thing – here is a compare between mine and the bought one. The bought ones are far too long for me, but the fabric is two way stretch and mine isn’t. If you try this with a two way, make it smaller – you could easily try it on once the elastic is on and pin the heel. For a two way merino, look for a small lycra/spandex content and then check it. I find that these ones however are generally a little thinner and I wanted cosy toesies 🙂

if you have a go, I’d love to see your version!