Holiday projects! We lovez them! For years I have had it in my mind to embellish a denim jacket with one of my beloved Virgin Mary panels. The trouble was, I needed to find, or make, a denim jacket in my size. Making one has never appealed to me, and it was only this month that I found one I love. 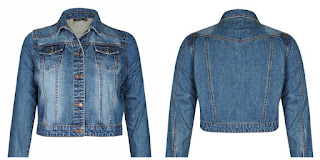 I love that it comes to the natural waist and is just a really good, classic shape.

I “auditioned” the various colour and style combos for Virgin Mary panels and this one won: 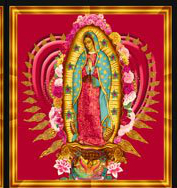 Because RED, and an interesting shape, kind of like a ginger jar.

I pressed some Steam-a-Seam onto the back and cut it out like this:

Shown cut out through all layers, the back (this is an old piece of SaS, before the grid markings we get now) and the back after the backing was peeled off. 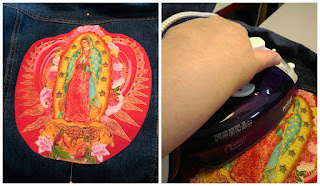 Just to be sure I didn’t put it on crooked, I put a pin at the half way point of the back panel top and bottom, and lined up the cut out panel with them. Then I pressed it into place. Weird photo of me pressing as I am left handed. 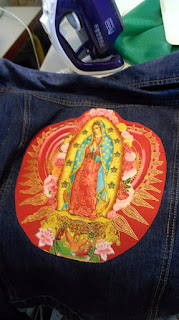 See why I called it a ginger jar?

Never one to stop at a single thing, I decided to add some embroidered motifs, These roses had no iron on back and though the plan was to machine embroider them on, I did want them SaS’ed first so they wouldn’t shift about. 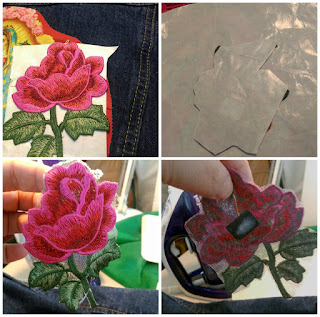 So I had a play; first I finger pressed pressed the rose onto a piece of SaS, then roughly trimmed off the excess paper. Then using the big piece of backing from the main motif as a pressing cloth, I pressed it so I could peel off the backing. The result is bottom left. The back is bottom right, showing how cleverly I left the price sticker on it! You can see a bit of a web of glue left over. Not good. I trimmed this out before pressing it onto the jacket, again using the backing paper as a pressing cloth. 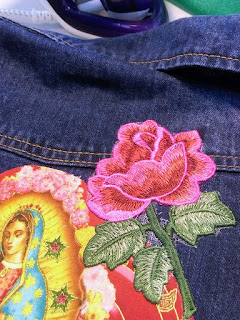 The rose pressed into position – a little bit of glue residue but it will fall off or wash out or whatever.

Still being determined to make this easier, I tried a different tactic.

I got all the way to the point where I have just hot pressed the SaS onto the rose and peeled off the backing paper, but to get rid of the residue, I laid it onto a scrap of fabric, right side down (so opposite to if I was attaching it) laid the backing paper over it and pressed it. What this did was to melt the residual glue onto the scrap, while leaving the rest on the rose. It was a teeny bit mozzarellaish peeling it off but it was fairly easy. 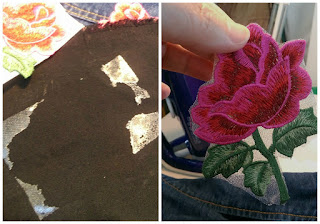 Hard to see but it has less residue to trim off. 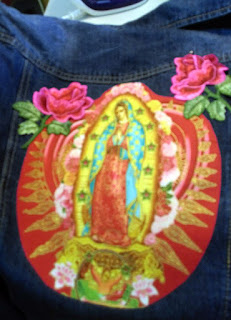 Rose two positioned. And now, onto the Birds! I grabbed a symmetrical pair of these gorgeous birds from the shop. They already had an iron on back which was pretty useless but really it is only to hold them in place for a wee while. 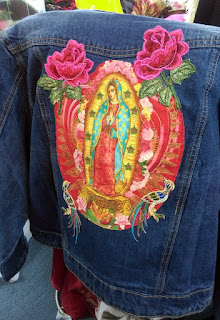 Here we are so far. I’ve machine embroidered this all with variegated thread. I am IN LOVE.